The next stop on my covidcation was Shenandoah NP. We started from the northern-most entrance and drove down. Our goal was to hike Hawksbill at night for some nice night time photos while also hiking to one of the falls. We got there around 3pm and drove down, stopping at most of the overlooks until we got to Big Meadow. We had a picnic lunch Elkwallow, where we regrettably missed the bathroom and gift shop by about five minutes We began running out of time somewhere around the Thorton Gap entrance, so we only made a few stops after that. One stop was Skyland which, despite the misleading name, lacked much of a view. We got to Lewis Falls just before sunset and managed to hike a shorter loop from a firebreak road. The trip there was downhill, the trip back, was the opposite, and I am far from in shape. No matter, the falls itself was a little disappointing, but the view of the sunset was pristine. I just wish I hadn't gotten winded so quickly so I could have got my mind focused on taking more pictures of the very red dusk.
We then drove back to Upper Hawksbill after a restroom break and my recuperation and proceeded along a very dark night hike to the highest summit in the park. We thankfully didn't run into any bears (though we did see one chilling by the road outside Skyland), and the stars were spectacular, despite an annoyingly bright moon and some light pollution on the horizon.
We were there until 12:36am before hiking back and beginning the long drive back home (which returned us just after 5am). The trip as a whole was amazing. We saw a bear, three raccoons, two owls (who were sitting right in front of our car when we returned from Hawksbill), a bunch of deer, a red thing, and two rock my girlfriend mistook for animal. Unfortunately, my camera was never primed when we ran into an animal, so I always missed the shot.
The full gallery is available here.

Popular posts from this blog

July 14, 2020
Some people try to visit every national park in the United States. I want to take that a step further. It's a goal of mine to visit every protected site/wilderness area on the globe. There are a lot. The UN lists thousands of protected sites around the globe, many of which are in remote, inaccessible regions. The US alone boasts over 1,000 sites, some of which, I'm pretty sure are just people's backyards. I remember years ago, my family registered our backyard as a wildlife habitat with some organization – I honestly think that might be on this list. All jokes aside, this is a monumental task, but it's one I hope to achieve over the course of my life. For each site I visit, I'll upload a photo and a post. Hopefully, we'll all discover a few secret spots along the way. Good luck, and cheers.  Abe
Read more 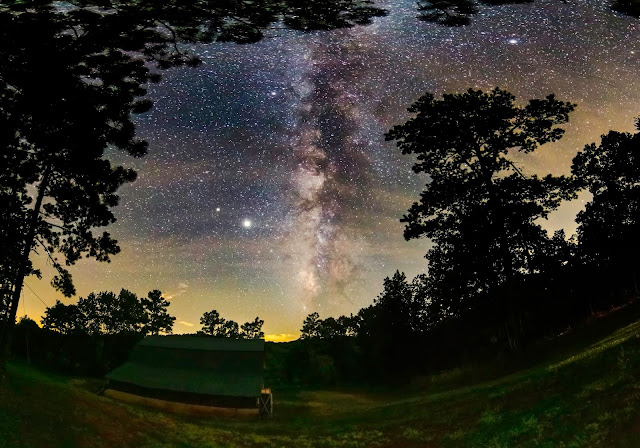 Milky Way Over the Barn Talladega National Forest is something of a regular visit for me. My family has a mountain-top cabin inside, so I tend to take trips out every once an a while. Unfortunately, I've not had a great opportunity to get photos there. I had an ass camera, and even assier skills through high school, and since I've gotten better equipment and talent, I've been over there less and less. I made a few winter trips which turned out alright, but never a summer trip to see the Milky Way. I'm always out during the summer, either that or too depressed to leave my house. Thankfully, this trip managed to garner some potential. Camera, lenses, and tracking mount in hand, I headed over with my family and waited.  The first night it was cloudy, but I managed myself an hour to get photos. The clouds did their dirty work, but it turned out okay .  Obviously not the best The clouds were a bummer, but I was hoping for a clearer night. I did not get that the next day: it
Read more